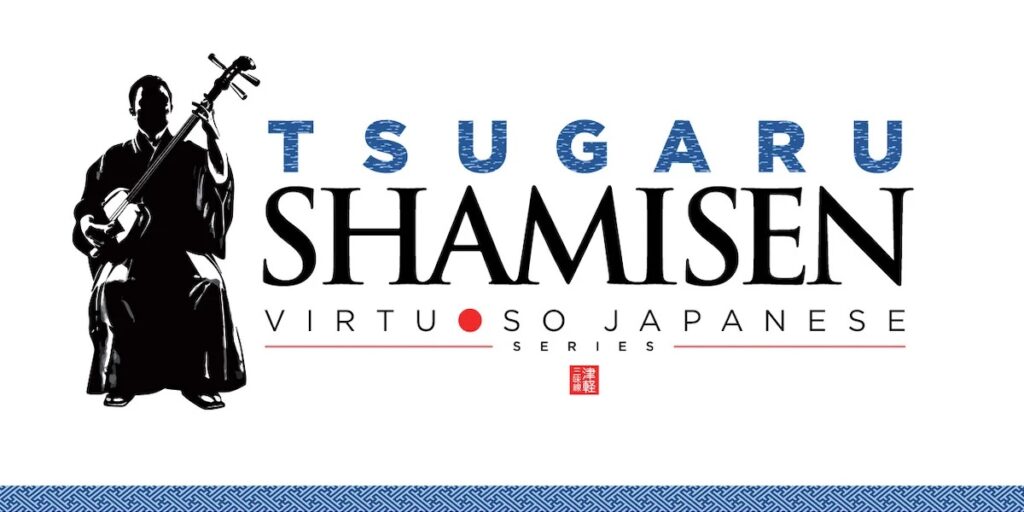 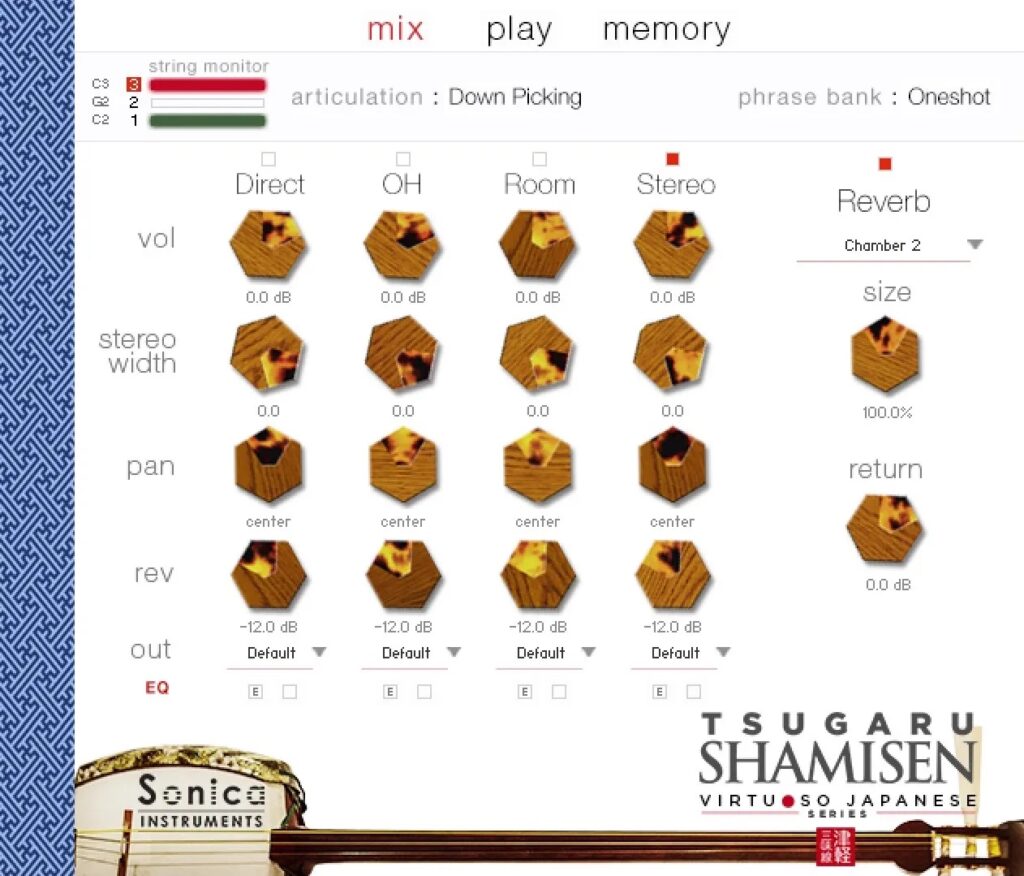 Tsugaru Shamisen provides separate sound sources for the azuma sawari and resonant tones that are crucial to create the tsugaru shamisen sound.

And just like the real instrument, the resonant tones respond to the specific interval being played. Furthermore, they are adjusted automatically to match different tunings and key transpositions to ensure an accurate recreation of the instrument’s sound. The volume of each resonance component is adjustable. 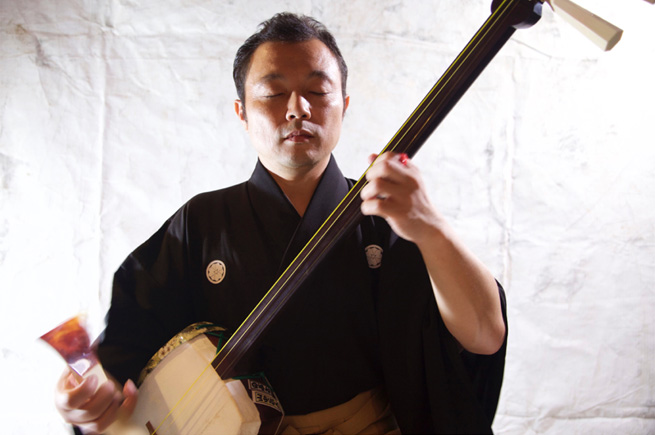 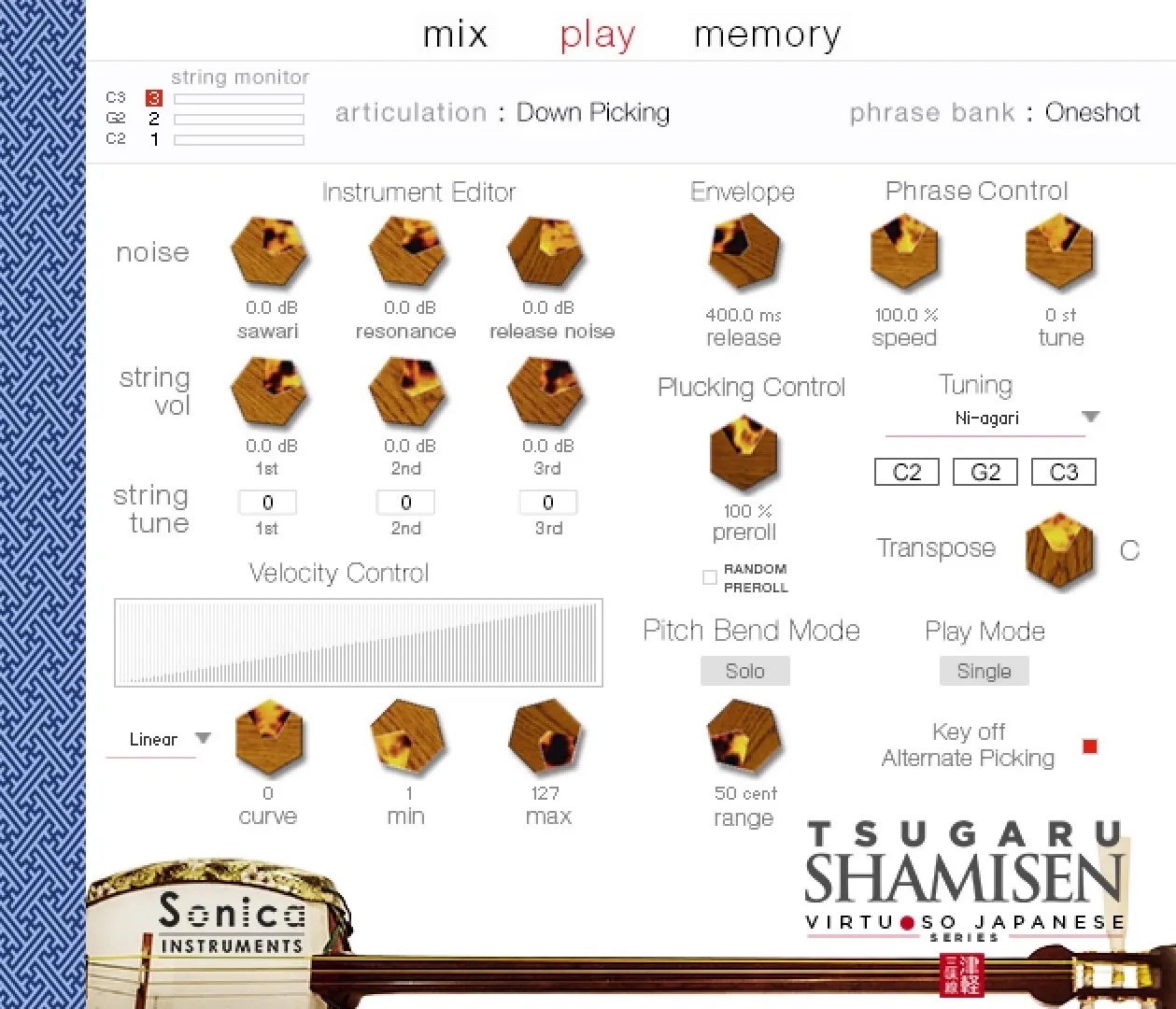 Although the tsugaru shamisen has three strings, unlike the guitar, chords are rarely played. Instead, a tsugaru shamisen performance usually consists of single-note phrases played mainly on the first or third string.

To recreate this performance style, we developed the String Mode Mechanism, which operates Tsugaru Shamisen like an instrument with three independent strings so that you can select and play a specific string.

When performing, the String Mode can be instantly selected with key switches. This lets you go back and forth between the three strings to play phrases just like on the real instrument.

The library comes with three standard shamisen tunings: ni-agari, honchoshi, and san-sagari. Changing the tuning changes the pitches of the open strings, although the keyboard’s chromatic notes do not change. The sawari and resonance effects track the tuning changes to recreate the inherent sound of each tuning.

The built-in Instrument Editor lets you adjust the volume and fine tuning of each string and the noise mixer lets you set the
sawari volume, the resonance volume, and the release noise volume. This gives you the ability to precisely tailor the instrument’s sound to your liking.

Hajiki is a left-hand pull-off technique fundamental to the tsugaru shamisen. When playing a MIDI keyboard with Legato, you can instantly access the hajiki sound from any articulation without a key-switch control.

Tsugaru Shamisen includes a function to recreate alternate picking, with Key On events triggering downstrokes and Key Off events triggering upstrokes. This function is active only while the sustain pedal is held down and inserts alternate picking instantly into any articulation. You can easily perform tremolo picking patterns by repeatedly hitting a key with the sustain pedal held down. 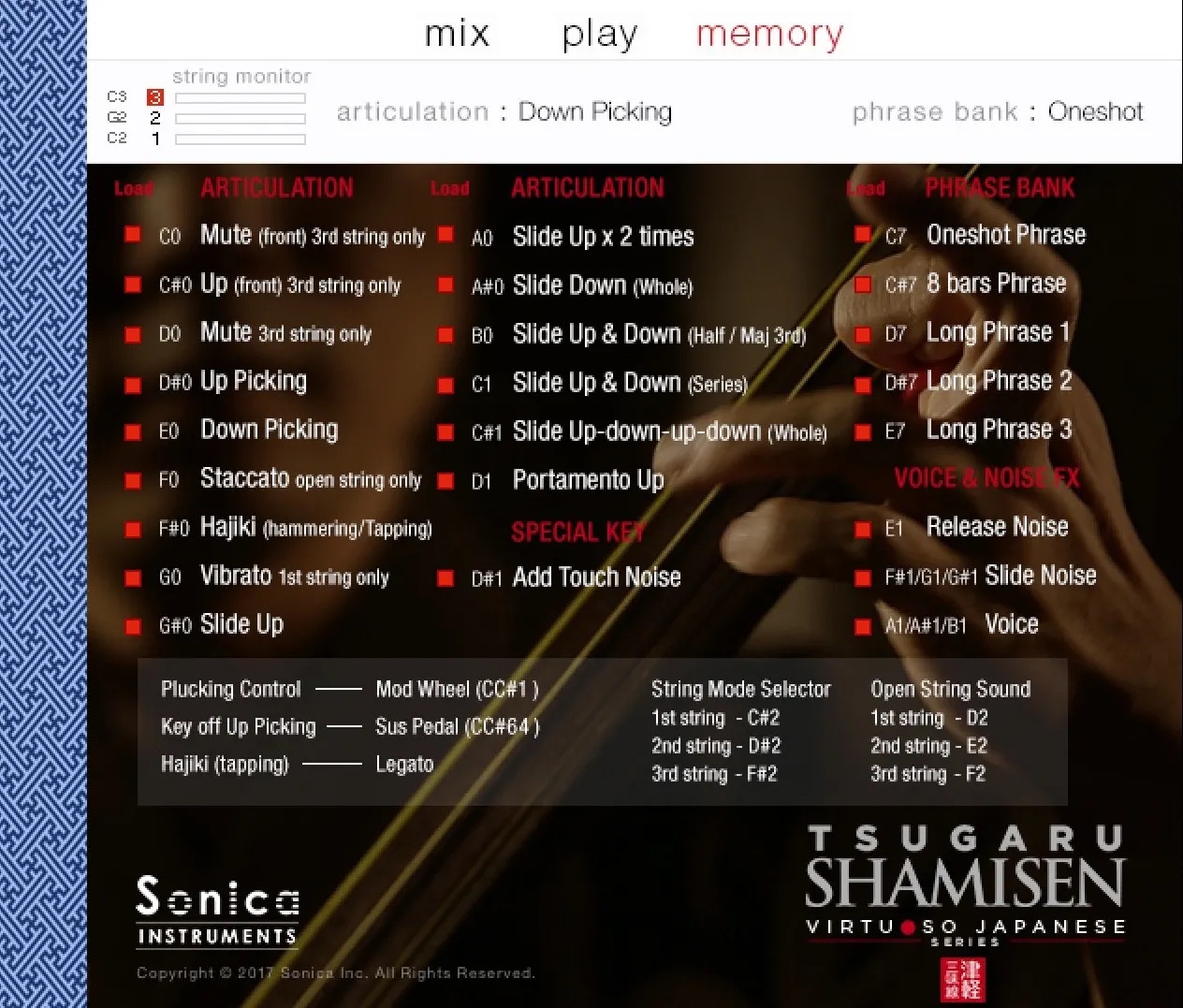 Nobuto Yamanaka played the tsugaru shamisen for our sampling sessions.
He poured tremendous energy into each note with his unerring skill and superb concentration.

In the studio, we used a meticulous microphone setup together with high-end microphone preamps with no coloration to capture the sounds of the instrument in their natural glory.

With the load manager, the performer can load only the desired articulations. Skipping unnecessary samples obtains better performance from the Kontakt engine. 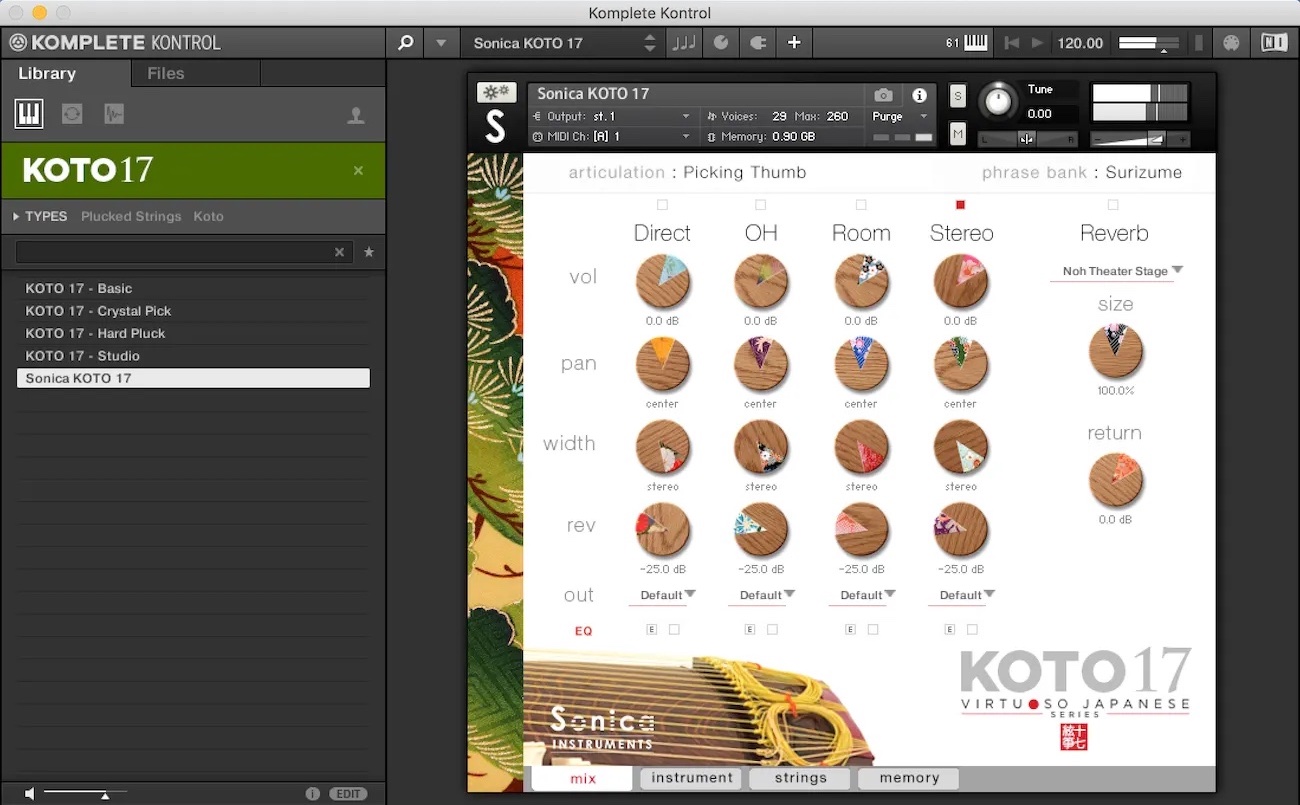 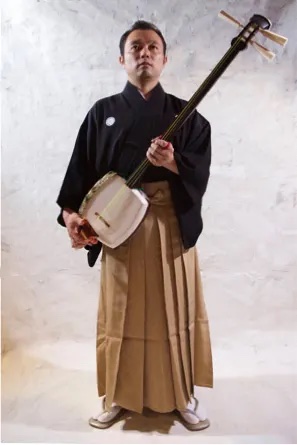 After graduating from middle school, Yamanaka, at the age of 15, moved on his own to Hirosaki, Aomori Prefecture, where he studied for four years as a live-in apprentice to the late Chisato Yamada, a master of the tsugaru shamisen. This experience led him to become an instructor in the Yamada School of shamisen.

After winning in consecutive years at the C and B Levels at the Tsugaru Shamisen National Competition (at Hirosaki University), Yamanaka further distinguished himself by winning at the top A Level. Later he went on to win three times in the Utazuke Division, demonstrating his technique in traditional utazuke (providing shamisen accompaniment to singing), the most difficult aspect of the art.

He has performed in 20 different countries, and as a member of the Takio Ito and Takio Band, he has performed modern arrangements of minyo folk songs such as “Nanchu Soran” for over 16 years.

Yamanaka currently gives concerts and lectures and performs at schools as a solo performer. He is also a part-time instructor at the Senzoku Gakuen College of Music and serves as a sightseeing ambassador for the city of Kazo in Saitama Prefecture.

On May 4, 2016, he was crowned the A Level champion, the highest award, at the 35th Tsugaru Shamisen National Competition, held at the Hirosaki City Hall in Aomori Prefecture.